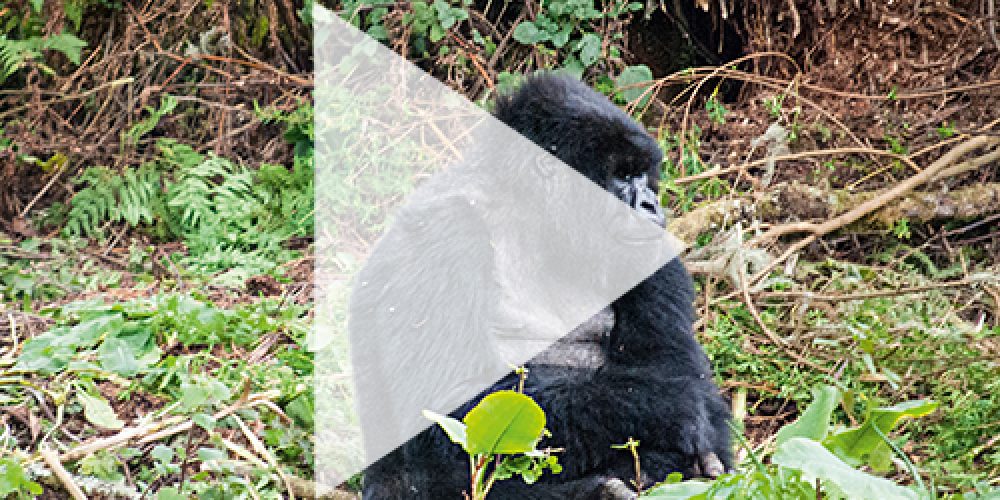 Like the chimpanzees and the orangutans, the mountain gorilla belongs to the hominids. This specie is strongly threatened with extinction; there are only around 880 mountain gorillas left on the planet.

Their last remaining habitat are the mossy forests on the Virunga volcanic mountains. Together with the „International Gorilla Conservation Programme“ (IGCP), which was founded by WWF and Fauna & Flora International, we set milestones to preserve the unique ecosystem of the Virunga Nationalpark. It offers an ideal habitat for many endemic animal and plant species, such as the mountain gorillas, the golden monkeys and the forest elephants. This initiative builds on the yearlong research of the American biologist Dian Fossey, which became world-renowned with her autobiography “Gorillas in the Mist” in the 1970s and its film adaptation in 1988.

An overwhelming encounter in the Virunga National Park

„ Are you ok?“ Jerome asks me. I am in the middle of a small glade in the jungle of the Virunga Mountains. A silverback is sitting less than ten meters away from me nibbling on a celery stalk. In the background, young mountain gorillas are climbing up small trees until the branches bend under their weight. „Yes,“ I reply. I am overwhelmed.

Jerome is our guide for today. He has led two Brits and me to a group of mountain gorillas called „Pablo“, which comprises of around 30 members. We are allowed stay exactly one hour with the gorillas to watch them up close.

Two days ago, Safari, our driver, picked us up from the airport in Kigali. Our gorilla trekking tour starts in Kinigi, a small town near the Volcano National Park. Safari already picked me up at 6 am in the morning and took me to the national park administration. There my authorization, which I applied for months ago, is being checked and I am assigned to a group. There is a maximum of 8 people per group.

At walking speed, the 4×4 struggles to get through the bumpy, rocky road. This two-hour drive is a challenge for both the car and us. The starting point for the hike heads uphill along a steep path as we leave the last fields and huts behind us. At the national park border we climb over a stone wall. Behind the wall lies a different world: surrounded by a dense bamboo forests; our eyes have to get used to the darkness first. A small path winds through the bushes. We often stop to breathe. We are hiking at 3,000 meters above sea level.

Jerome is in constant contact with his colleagues on his walkie-talkie. They know where the mountain gorillas are. We get up higher and higher, leaving the bamboo zone and fighting through the stinging, nettle scrub. After a two-hour hike we first hear the roaring of the gorillas. We must be very close now. We leave our backpacks behind and move on. Out of nowhere, a gorilla appears a couple of meters away from us. This is the first time I have ever seen a mountain gorilla; his dark black fur stands out clearly from the luminous plants around him.

I soon feel like being part of the gorilla group. The silverback, Gicurasi, is watching us. Dominating males, so-called silverbacks, can weigh up to 200 kg and grow to 1.75 m. Every now and then he walks in our direction; then Jerome grunts to sooth him.

Finally: „We have to go“. Jerome gives us a few more minutes. We say goodbye to the gorillas. This one hour has flown by far too quickly. But the experience will become more than a lasting memory.

View all posts by spc →

All our projects are certified Gold Standard projects. This is the world‘s most demanding and rigorous certification standard for international climate protection projects, recognized by public Institutions and International NGOs alike.

For detailed Information about the project, the context and the connection see our brochure.